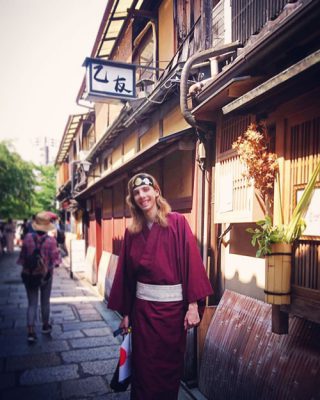 The ancient capital of Japan, the beautiful Kyoto, has hundreds of shrines and temples where you can feel the true Japanese spirit that lasts over time.
In Kyoto there is also an entire district that has remained intact despite changes in the country, and is unique in its style. This place is the Gion district.
Gion is the place where the famous Geishas, ​​the cultural symbol of the nation of the rising sun, come alive. Geisha means “Artist”, although in Kyoto they are not told in this way, but instead use the term “Geiko” which means “Woman of art”. This district was originally created to serve as a resting place for those who were going to pray at the Yasaka Shrine, which remains in the same area. Little by little, this place evolved into a place for the entertainment of samurai, important people and great businessmen. In Gion there are two districts called “Hanamachi” which literally means “city of flowers” and is where the “Okiya” and the “Ochaya” are.

Okiya is the house of the geisha. There they live in private rooms and this is where they prepare before going to work in the Ochaya. Generally the Okiyas have a person who directs them, and this is usually an older Geisha, already retired, who is usually called “Mother.” Today there are variations of this tradition and it depends on the Okiya how to live and who directs it.
Ochaya literally means “Tea Shop”, and it is the place where customers go.
Having contact with a Geisha is a luxury that only people with connections in the city or people with a good budget can enjoy. In the private rooms, the Geishas entertain clients through dances, songs, board games and interesting conversations. Geishas are a living work of art, and therefore must be respected as such. In the district of Gion there is also the “Gion Corner” or corner of Gion where you can see a musical show performed by true Geishas. It is currently the easiest way to see a Geisha up close if she goes to Kyoto as a tourist. As the Geisha make life in Kyoto, from time to time the Geisha or the Maiko may appear fleetingly walking the streets of Gion on their way to work or home.
Being able to observe a Geisha or Maiko in this way is a really exciting experience. It should be clarified that if a Geisha or Maiko is seen in this way, they cannot be stopped to take a photo of them, they cannot be touched or approached improperly. If you see them by luck, you can take photos from a safe distance and be satisfied that you could have seen them. If you do some of the previously written things that go against the protocol you could end up being stopped by the police, so let’s admire the beauty of the Geisha or Maiko from a safe and respectful distance.
A Maiko is a Geisha apprentice. Generally her dress is more colorful and her hair has small ornaments that hang elegantly. Generally, a Maiko becomes a Geisha when she reaches the age of majority and meets the requirements demanded by the Okiya.

Back in time to “Memoirs of a Geisha”

The Gion district is protected by the government of Japan so that no construction is done that can destroy the traditional beauty of Gion.
In Gion there are many types of restaurants of traditional Japanese food, as well as elegant western food. If you visit this wonderful place, it is recommended to be dressed in Kimono. Kimono is the original Japanese clothing and is a way to show respect for the ancestral culture of Kyoto. In addition, wearing a kimono in the Gion district gives you the possibility to take some spectacular photos that make it seem like time has traveled to the magical old Japan.
Recently, the Gion district attracts thousands of foreign tourists because almost all the history of the famous movie “Memoirs of a Geisha” takes place here. It should be clarified that the geishas do not provide sexual services of any kind, and have never done so. Unfortunately, foreign visitors confuse the Geishas with the extravagant Oiran. The Oiran were the super stars of the Edo period, being high class courtesans.
While the Geishas are entertaining artists and take customers to a wonderful and secret world. At present the Oiran no longer exist, the Geishas do.
Visiting Kyoto and not visiting the Gion district is like not having gone to the original capital. Gion is an unforgettable walk that is recognized worldwide for its unique beauty and tradition.