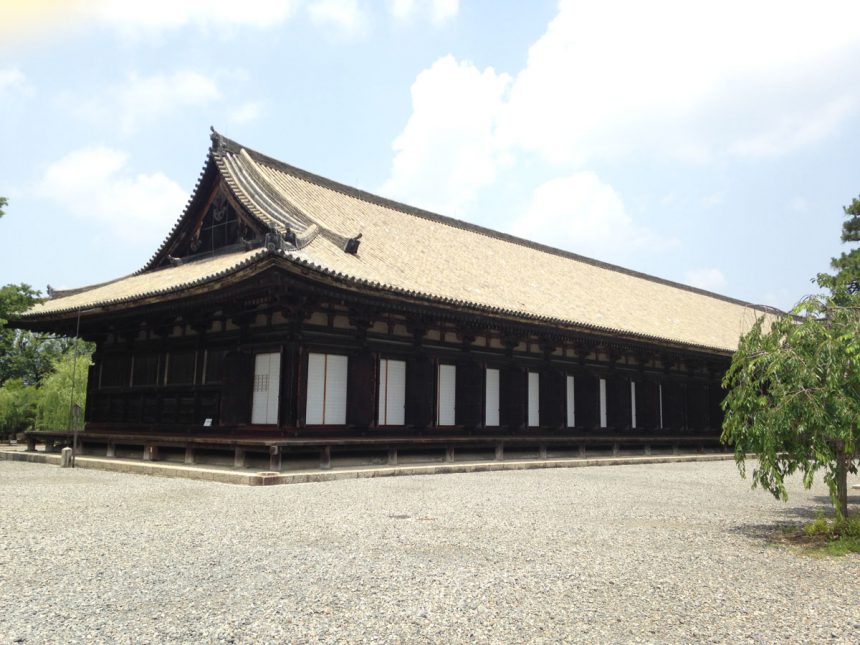 The official name of Sanjusangendo is Rengeo-in temple, and the structure is registered as a National Treasure by the Japanese government. It was established by the powerful warrior-politician Taira-no-Kiyomori in 1164.

The original temple building was lost in a fire, but the building was reconstructed in 1266. That structure has remained unchanged for 700 years since then with four great renovations during that period. The long temple hall, which is about 120 meters long, is made in the Wayo (Japanese) style architecture. As there are thirty-three spaces between the columns,  this temple came to be called “Sanjusangendo” (a hall with thirty-three spaces between columns).

Other noteworthy objects in this temple are the roofed earthen fence and the South Gate, which are registered as Important Cultural Properties. They are noted in connection with Regent Toyotomi Hideyoshi and reflect the aesthetics of the 16th century.

The powerful and dynamic statues of the Thunder God and the Wind God are placed at either side of the temple hall on raised pedestals of cloud shape. The images of these gods derived from people’s fear of and gratitude for nature in the old days.

People worshiped them as deities who controlled rain and wind, and brought about good harvests. These statues are representative masterpiece sculptures of the Kamakura period (12th-14th centuries).

The twenty-eight images placed in a straight line in front of the 1001 Kannon statues are guardian deities which protect the Buddhist deity as well as pious Buddhists who believe in her.

Sanjusangendo is one of the most important visit to make in the city of Kyoto.

The temple was originally built in 998 as a rural villa of Fujiwara no Michinaga, one of t...
">

In the early medieval years, rich nobles traveled to Arashiyama to enjoy the natural lands...
">

If you don't have the budget to see Kyoto's geisha in action in an actual tea house, Gion ...
">

Kinkakuji was founded in 1397 as a resting villa for the third shogun of the Muromachi era...