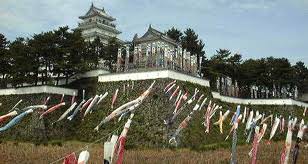 Shimabara is a Japanese city located in the northeastern part of the Shimabara Peninsula, encompassing the Ariake Valley to the east and Mount Unzen (including Mount Fugendake) to the west, in Nagasaki Prefecture, island of Kyūshū, Japan.

Shimabara is a castle-town, and was the capital of Shimabara’s domain during the Edo period. It was the site of considerable foreign trade and missionary activity during the late Muromachi period, and in the early Edo period, a large percentage of Shimabara’s population were Kirishitan (Japanese Christians).

Due to misgovernment, high taxes and the persecution of Christianity, the population rose up in arms initiating the so-called Shimabara rebellion of 1637, which was suppressed with extreme severity by the Tokugawa Shogunate. Shimabara was ruled by a genealogical branch of the Matsudaira clan from 1668 to 1774 and from 1774 to 1871.

The modern city of Shimabara acquired the name of city on April 1, 1940 with the merger of the old town of Shimabara with several nearby villages. On January 1, 2006, the town of Ariake, Minamitakaki District, was added to Shimabara City. Throughout its history, Shimabara has been dominated by the seismic activity of Mount Unzen.

A large volcanic eruption in 1792 caused a tsunami that destroyed much of the town, killing about 15,000 people, making it one of the worst volcanic disasters in Japan’s history. In recent history, major eruptions have occurred in 1990 and 1991, resulting in pyroclastic flows that killed 43 people and forced hundreds of others to evacuate. The fifth international conference on volcanoes was held in Shimabara on 19 November 2007.