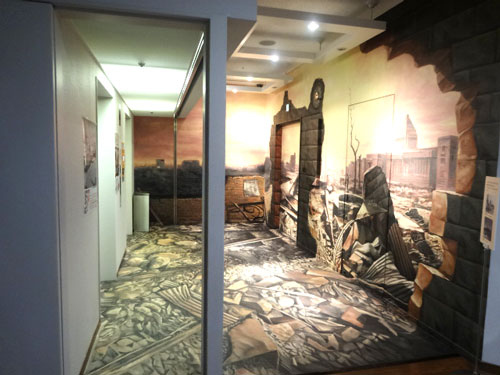 In the heart of Tokyo, about 5 minutes from the Yasukuni Shrine, is the museum of contemporary history: the National Showa Memorial Museum, or Showa kan in Japanese. Located in Kudanshita, it is an imposing silver building that invites people to take a tour of Japanese day-to-day life in the Showa Era (1926-1989).

The Showa Era is one of the longest ages in Japan, as this includes the period before, during, and after WW2, until the reconstruction and modernization of the country. This museum offers the opportunity to observe firsthand how the common citizen lived at this time. The museum has real objects of daily life and even exhibits the special clothes that people used to flee the fires caused by the bombs dropped by the US in WW2.

The museum tells the tales of the hard life of the average Japanese until the end of the war. From then on, the first inventions of Japanese technology are on display, which with much effort, Japanese companies began to develop. There are many stops in the museum where you can touch, taste, feel the essence of the citizen Showa. The museum tells us about the importance of peace and not forgetting the sacrifice that the people of the time had to make to rebuild Japan as we know it today.

The museum also has a section of private computers full of complete information on the years of the Showa era. You can find songs, photos, videos, news, and documentaries, among others. The art and design used at the time are also reflected in the posters, advertisements, and books of the exhibition. From time to time an additional exhibition is held on a special subject, such as the 1964 Olympics.

Unlike other history museums, the Showa museum specializes in showing how the common citizen lived. It is a moving visit that allows you to take a look at the past and see the great evolution of Japan in such a short time. It is suitable for all audiences since the museum is adapted to be visited by all ages.

In the museum, you can try the original clothes of the time, try to draw water from a well, make calls on old phones, and have many more interactive experiences. Seeing the history from the point of view of a common citizen is an experience offered by this important museum. If you want to know more about regular Japanese life, then you should visit this interactive history museum.

If you are looking for luck in the area of ​​love, you can visit the Tokyo Daijingu Shrine...
">

In the heart of the Japanese sumo wrestling city of Ryogoku is the acclaimed Edo-Tokyo Mus...