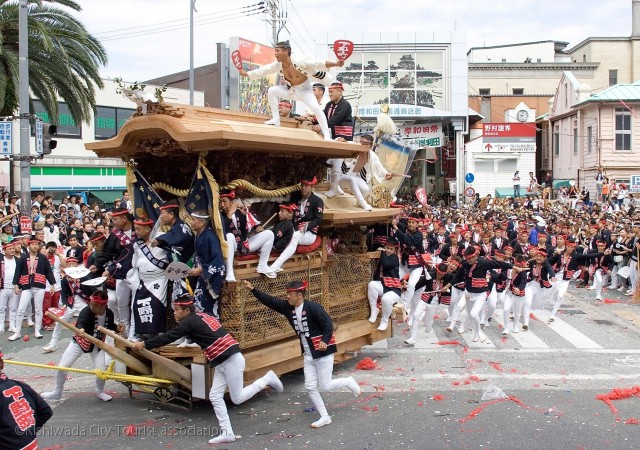 The Danjiri Matsuri (float festival) from Osaka, is said to have its origin in the Inari Matsuri held in the 16th year of the Genroku era (1703). The festival was created by the Lord of Kishiwada Castle to pray for an abundant harvest, and it has from its very beginning enjoyed great local support.

The Danjiri Matsuri quickly grew in significance for the people of Kishiwada. Gates normally barring townspeople from entering the castle grounds were thrown open on festival days. Feudal Lords of Kishiwada looked on as each Danjiri was drawn in, and each Danjiri pulling team staged various, high-spirited performances.

With 300 years of tradition and all of Kishiwada behind it, the Kishiwada Danjiri Matsuri is proudly held in September each year in Osaka near Kishiwada station. 34 Danjiri teams bring their sacred float on a  ‘recklessly’ swift tour of this castle town in a race of strength, endurance, and celebration.

The citizens of Kishiwada are proud to hail the Danjiri Matsuri of Kishiwada as the greatest of its kind in Japan. Townspeople, from the youngest to the oldest, take part in the festival with duties assigned to them according to age, and with each Danjiri team organized and managed by a particular ‘Cho’ (an area within the community covering a certain number of blocks). Few examples of traditional cultural festivals of this size and of this degree of organized participation exist in Japan today.

Shinto shrine Imamiya Ebisu (colloquially called "Ebessan") is the most famous among the s...
">