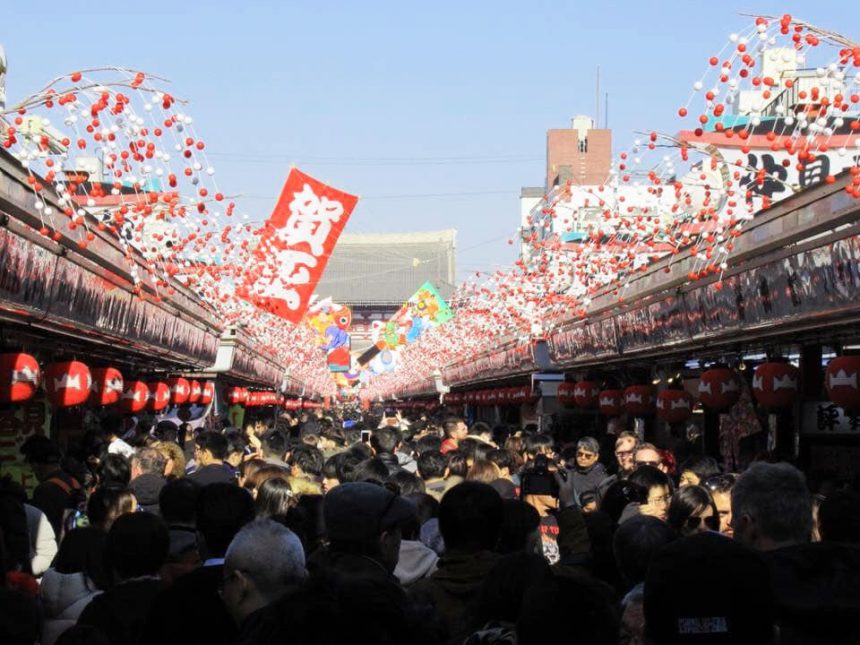 Hatsumode is one of the most beautiful celebrations of the whole year since it is about receiving the new year in a spiritual place and connecting with the divinity from day one.

Each year, January 1st dawns in Japan with crowds of people visiting Shinto shrines and Buddhist temples to pray for safety and prosperity throughout the year ahead. This occasion is known as hatsumode (literally, ‘first prayer’). Many people are clad in kimonos and lively food stalls line the streets on this day. Hatsumode is usually celebrated from January 1-3. Many people make this visit after midnight on the 31st, and huge crowds gather at the larger shrines, such as Tokyo’s Yasukuni Shrine and the Meiji Jingu.

The tradition started in Tokyo, and after the opening of the railway in the Meiji Period residents from all over the area would come to Tokyo or nearby famous shrines for Hatsumode, and it slowly became an important tradition in Japan. As Japanese cultural celebrations use elements of both Shinto and Buddhist traditions, both Shinto Shrines (jinja) and Buddhist temples (otera) are popular places to ring in the New Year.

It is common to wear fine clothes for the New Year’s temple or shrine visit to pay your respect to the enshrined deity. Thus, it is a time when both women and men can be seen wearing kimono. New Year’s is a great occasion to step out in traditional Japanese clothing.

Most shrines and temples offer omikuji (fortune slips), and it is common to buy one to predict your luck for the year ahead. Generally, omikuji cost around ¥100, and after payment, you draw a number at random which you exchange for a corresponding fortune. On the paper slip you will find your overall level of fortune (for which there are 5-7 different levels), and more specific information about your prospects in various areas of life, including work, romance, and health. Good fortunes are often kept, while bad ones may be tied up at a designated spot at the temple or shrine in order to pray for better fortune. Some larger temples and shrines have omikuji in English.

Writing the first Ema of the year is also significant. An Ema is a wooden tablet that generally has a design with the animal of the year or of the shrine. The first prayer of the year is written on this tablet, and it is hung in the shrine in a suitable place. The prayer can be written in any language.

While most foreigners know about kimono, another traditional Japanese garment called hakam...
">

In Japan, for many years the way of dressing was very different from the fashions of Weste...