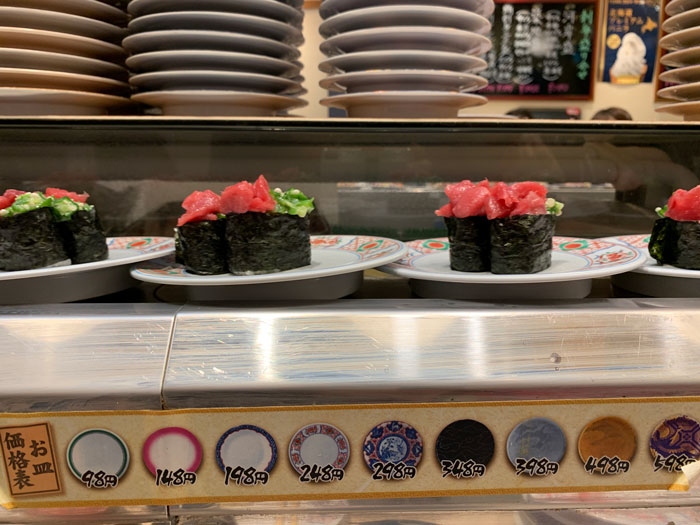 Sushi is a Japanese food that came to be appreciated worldwide ever since the California Roll was invented in the United States by a Japanese chef in the 1960’s in order to get Americans acquainted with eating sushi. Traditional style sushi as we know it today, or Edomae sushi, originated in Edo (now Tokyo) and it was originally a fast food for the people working around the harbor. This style of sushi is called ‘nigiri’, and it is the simple form of sushi with a small piece of fish over rice.

Everyone knows how expensive excellent sushi in famous restaurants can get. Even though it is an experience that you should try if you come to Japan if you have the budget for it, we would now like to introduce you to kaitenzushi, or kaiten sushi, the type of sushi that goes around on a conveyor belt. It is a lot more accessible in terms of price, and still very delicious. It is very easy to order as you can just grab whatever looks good to you from the belt, so that makes it perfect for a first experience with sushi in Japan.

The plates that the sushi sits on have different colors and these stand for the different prices if the restaurant works with different prices. At the cheaper chain restaurants, the cheapest plates go for 100 yen, and these usually contain 2 pieces of sushi. Examples of what you can get for 100 yen are the cheaper versions of salmon, egg sushi, or tobiko (flying fish roe) sushi. In general, you either take from the belt what you want to eat, or you can also order directly from the chef if you don’t see the type of sushi you want to get or if you want it made freshly.

There is usually a menu that shows all types of sushi they have, and they often also serve other types of food such as fried chicken, fried potatoes, miso soup, salads, tofu, udon, and desserts. This makes a kaiten sushi restaurant perfect for parties where not everyone wants to eat the same type of food. Some restaurants are very modern, as you can sometimes use a touchscreen to order and the food will be brought to you by little train. An example of this type of restaurant is Genki Sushi in Tokyo. They often have multiple languages on the screens as well.

When entering the restaurant, you must indicate if you want to sit at the counter or at a table. In some establishments, a plate with the table number is delivered to the customer. With each seat comes a bottle of soy sauce, a bowl of pickled ginger, a stack of small plates for soy sauce, a box of chopsticks, a small bowl of green tea powder (or tea bags), cups for tea and a hot water dispenser. Tea is usually self-service. To do this, put some powdered green tea in the cup and add hot water from the dispenser.

As you consume your sushi, stack the empty plates on your table. At the end of the meal, the shop notified through the screen that the bill is desired and the server will calculate the invoice based on the number of empty plates. It can also be calculated automatically, in that case, you must take the table number plate that was delivered at the beginning and deliver it to the cash register to pay.

If you are in a city in Japan and want to eat in a kaiten sushi restaurant, the following restaurants are recommended (all have a basic price of approximately 100 yen per dish):

Sushi in now famous all over the world and it is off cours a typical Japanese cuisine....
">

Ramen became one of the iconic foods from Japan, having gained a lot of popularity outside...
">

Harajuku doesn't just offer fashion, but it's also the place to go to satisfy your sweet c...