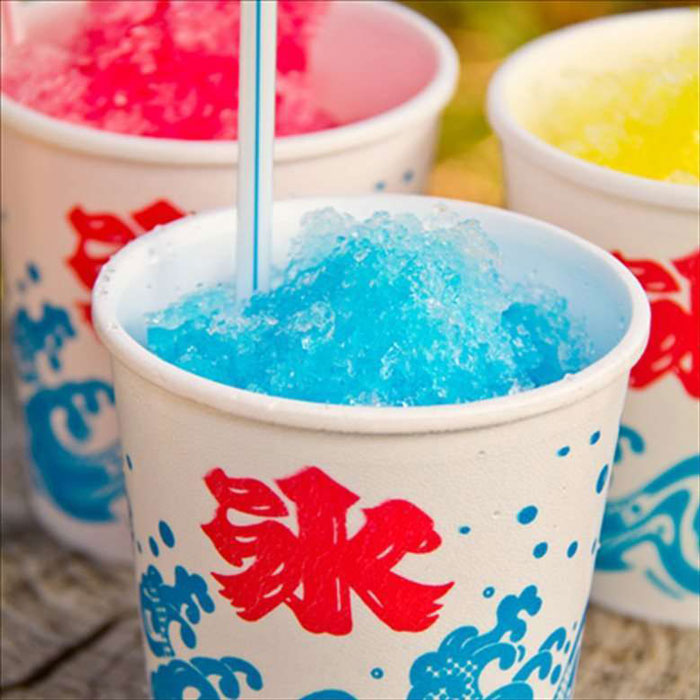 During the summer, temperatures in Japan can be quite high and the atmosphere gets very humid. This makes finding ways to cool down indispensable, and how to better do this than with fresh shaved ice? It is one of those things that kids look forward to every summer, besides noodle rivers, camping trips, and watermelon smashing.

The Japanese version of shaved ice is kakigori, and the regular version is made with ice that has been shaved to resemble snow and copious amounts of melon, lemon or blue raspberry flavored syrup. The texture of a Kakigori is slightly different from slushies or slurpees since it is thinner but it still has crystals, and that is why it is always eaten with a spoon. Like many foods and drinks in Japan, kakigori comes in many versions with various flavors and also of a different quality.

This dessert dates from the Heian era (794-1185) when ice was stored in warehouses called ‘himuro’ to be taken to Kyoto in the summer. Here, the syrup was added and the dessert was handed out to the Japanese aristocracy. Much later, in the Meiji era, ice became more accessible and the machine that can mass-produce kakigori was invented a b bit after that. Since then, when summer comes it is sold everywhere, becoming one of the various ways to tell that summer has come and time is passing. The stores that sell kakigori indicate this with a flag with the symbol “氷” in red, this symbol reads ‘kori’ which means ‘ice’ in Japanese.

Where To Find It

This tasty dessert can be enjoyed in street stalls during festivals, events, and at most touristic places. It can also be consumed more elegantly in restaurants specialized in creating them. The latter version is more high-end and is a nice experience to try when you are in Japan, not to mention the very nice photo opportunity it will give you. While the kakigori on the streets is usually flavored with melon, lemon, or blue raspberry, the restaurant versions are often made with green tea, strawberry, or kinako.

Harajuku doesn't just offer fashion, but it's also the place to go to satisfy your sweet c...
">

While during wintertime people in Japan tend to stay indoors where it is cozy and warm and...
">

Wagashi are Japanese sweets that look more like a piece of art than something to eat. Waga...
">

Sushi is a Japanese food that came to be appreciated worldwide ever since the California R...